This is an interactive problem.

To use the supercomputer, the user needs to input a non-negative integer ~a~. At the same time, the computer initializes a variable ~x = 1~. Afterwards, the quantum gates from ~1~ to ~n~ will be activated sequentially. When activating the ~i~-th gate, the computer changes ~x~ according to one of the following possibilities:

in which ~a \bmod b~ denoting the remainder of ~a~ when divided by ~b~.

Each outcome has the same probability of happening, and there are totally ~2^n~ outcomes in the activation process of all quantum gates. However, since this is a quantum supercomputer, so instead of returning a specific value of ~x~, it returns the overloaded value of ~x~, equivalent to the expected value of ~x~ for all possible scenarios.

Note that the overloaded value itself may not be an integer, but the computer will return said value modulo ~998\,244\,353~.

Afterwards you should interact with the jury program.

When you're done, output on a single line ! denoting you are ready to answer questions.

Afterwards, you have to answer ~q~ questions from ~\textit{ngfam}~. For each question, the jury program gives you a single integer ~a~ (~0 \le a \le 998\,244\,353~). You need to calculate and provide the overloaded value of ~x~ that the computer would've returned if supplied with said value ~a~. You have to answer the questions sequentially, meaning you won't receive the next question (if any) without answering the current one first.

After printing a query do not forget to output end of line and flush the output. Otherwise, you will get Time Limit Exceeded. To do this, use: 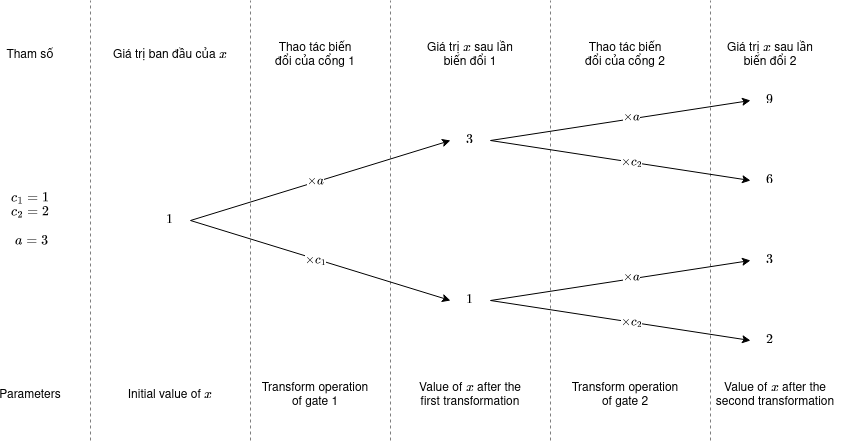 In the second example, the distinctive parameter of the only quantum gate is ~c_1 = 5~.