You are given an undirected graph with ~n~ vertices and ~m~ edges, in which no edges connect a node to itself, as well as no pair of nodes are connected by more than one edge. Initially, each node in the graph is colored white. Your task is to color some nodes blue, such that ~q~ requirements are satisfied, the ~i~-th requirement stating that the shortest distance from node ~c_i~ to any blue node (possibly itself) is exactly ~d_i~.

If there does not exist a coloring satisfying all requirements, output NO.

If there are multiple valid colorings, you may output any.

Not the final scoring

Illustration of the first sample.

Another solution would be to color the nodes ~3~ and ~6~ blue.

In the second example, we can color the node ~4~ blue. The other nodes can be colored arbitrarily. 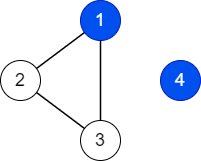 Illustration of the second sample.

In the third example, the distance from node ~1~ to both of the other two nodes is ~1~, therefore it is impossible to color a node such that the closest distance from ~1~ to a blue node is exactly ~2~.